This 2013 documentary film by Paul Crowder explores the safety record of Formula 1 in the 1960s and, primarily, 1970s.

It was a time when the sport emerged as a global phenomenon and began to enjoy widespread media and television attention.

However, the sports battle with its remarkable dangers led to gradual reforms from 1978 that have developed to make F1 what it is today.

1: Life on the Limit and the Resistance to Motorsport Safety

Narrated by Michael Fassbender (yes, that one), 1 is essentially a documentary version of Sid Watkin’s excellent book Life at the Limit (1994).

Terrible statistics for an international sport and made even worse by just how appalling some of those fatal accidents were.

The transition from the 1960s to 1970s saw the cars speed up a great deal as technology improved, by safety standards didn’t budge an inch.

And the cavalier attitude of “if you don’t like it, get out” left the drivers pretty defenceless.

So the ’70s began with a posthumous world champion in Jochen Rindt, killed at Monza before he’d had a chance to enjoy his success.

Piers Courage had crashed and died that season, too, and over the following years the sport lost Jo Siffert, Roger Williamson, Francois Cevert, Peter Revson, and Helmuth Koinigg. All before 1975.

In 1977 things reached another nadir when Tom Pryce and marshal Jansen van Vuuren were killed in a horrifying collision.

As grim a reading as that all makes, Life on the Limit explores why these young men were happy to risk their lives in Formula 1.

The sport has always been very glamorous and was excessive and in the ’70s it was all gung-ho bravado and macho playboy stuff. James Hunt epitomised all that.

Thanks to the efforts of a select few men, progress was made in the late ’70s.

And it’s this area of F1 in the 1970s that the documentary explores thoroughly, with interviews from many leading lights of the day.

To highlight his point, he often recounts how he crashed at Spa in 1966 and was trapped in his vehicle while drenched in fuel. He was eventually taken from the car and placed on the ground in an old hut surrounded by discarded cigarette butts.

Stewart was met with great resistance from F1’s upper echelons, fellow drivers, fans, and journalists who all took a dim view at changing the accepted norm.

And there’s still a sect of F1 fans who just seem to want regular death in the sport, otherwise the drivers are “wimps” and the sport has been “ruined”. It’s bizarre.

The sport was just hellishly dangerous in the ’70s. For those not around at the time (like us), it’s baffling there was so much resistance to basic safety features.

It’s an area touched upon in the excellent Williams F1 documentary (2017), but it certainly needed exploring further.

The stress and pressure of this reality must have been almighty on the drivers, but more so on their family members and friends.

And that’s something Damon Hill covered in his 2016 autobiography Watching the Wheels. His mother was left with a nervous affliction due to her husband Graham Hill’s profession.

F1 drivers dropped like flies with one brutal accident after another. There was no guarantee on who’d survive, most of the time it was down to luck.

This was a position initially met with hostility by many. Race track organisers, for example, viewed Watkin’s appointment as a professionalism monitor.

The professor (who died in 2012) appears in 1: Life on the Limit to pass on his knowledge and experiences.

But there’s no denying this opening hour of the documentary is very sad and tragic. Perhaps most poignant when reaching the story of a charismatic Frenchman.

The Case of Francois Cevert

We’re going to cover Francois Cevert’s story in full at a later date. But one look at the guy and the most immediate observation is how good looking he was.

This was leading man movie star level, you could have stuck him in any old film and people would have flocked to stare at him.

But there was much more to Cevert than that. By all accounts he was wildly charismatic, personable, polite, well-mannered, and an ever positive presence to be around.

He was also a fantastic racing driver.

Teammate to Sir Jackie Stewart, the pair were close friends and the Scottish driver had mentored him for three seasons at the Tyrell team. 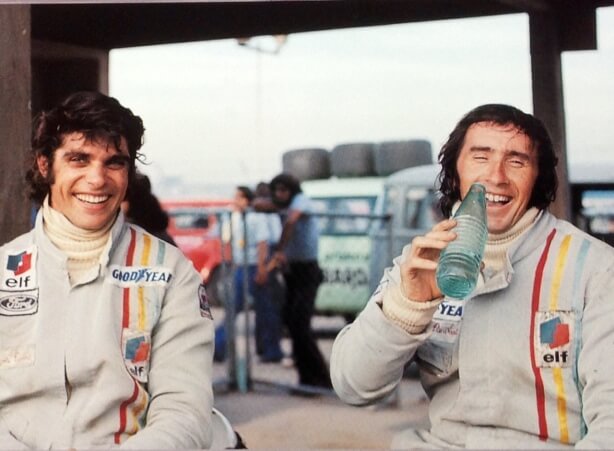 The idea in 1973 was for Stewart to retire at the final race of the season at Watkins Glen, New York. He planned to make the announcement after the race, having already claimed his third title.

Cevert would then have been perfectly poised to head into 1974 as team leader. A triumphant future for the sport and charming Frenchman.

What actually followed is arguably the sport’s lowest ever point, with Cevert crashing in the final moments of qualifying on 6th October, 1973.

In a violent impact, his Tyrell uprooted a barrier and it tore right through his car, with the vehicle landing upside down.

There are pictures of the immediate aftermath of this accident, with marshals trying to help.

Young South African driver Jody Scheckter saw the crash and pulled over to help. He was actually the first person on the scene. In the pictures, he can be seen in distress waving his arms around for assistance.

Stewart also stopped at the scene. In 2018 he told the official F1 site:

Stewart still keeps several pictures of Cevert around his home.

And he still has a lot of incredibly positive things to say about the Frenchman and their friendship, even almost 50 years after his death. From the same 2018 interview:

“I don’t think there’s anybody who’s ever been a match to Francois Cevert. In every element: his manners, his presentation skills, his good looks, his driving skills. He became a great friend of the whole family. He stayed with us quite a lot, we travelled together a lot, and we were just awfully good friends. And I think that kind of thing probably is quite rare.”

Like no other, Cevert’s story really highlights just how horribly tragic F1 was as an arena in the 1970s.

There’s no shying away from this and pretending it was “better in the good old days” when having to recount stories like this.

An outcome where some basic safety improvements could have prevented the whole thing. But F1 didn’t learn.

Exactly one year to the day since Cevert’s fatal crash, the sport was back at Watkin’s Glen for 1974.

The subsequent accident he suffered was low speed, but the barriers were poorly fitted and Koingg’s car went under one.

One marshal arrived on the scene to find the driver’s helmet lying nearby and picked it up, only to have the shock of his life when he realised what was inside it.

Such brutal tales are what you’d normally expect from soldiers recounting battles from the World Wars.

This was a global sport. But thanks to the efforts of Stewart, Ecclestone, Mosely, and Sid Watkins progress was made in the late ’70s.

And so we reach complete the journey 1: Life on the Limit makes. Although it was released in 2013, F1 had already reached significant safety milestones by then.

Since Ayrton Senna’s fatal accident in 1994, F1 has been on a mission to ensure the maximum possible driver safety.

Along with the humane side of that mission, it’s simply very bad for business if drivers are dying live on air with a 500+ million strong global audience watching.

He suffered a major head injury in an October 2014 crash and died in July 2015 from his injuries. That led to further safety enhancements, most notably the “halo” cockpit protection device.

And every single improvement to F1 safety was put to the test with Romain Grosjean’s accident in 2020.

The enormously likeable Frenchman’s Haas car slammed through a barrier, which ripped the vehicle in two, and caused it to burst into an enormous fireball.

Had the accident happened a few years earlier, he’d almost certainly have been killed on the spot. And it was, in many ways, a shocking reminder of F1 in the ’70s.

But despite badly burned hands, Grosjean is a live and well and now living in America with his wife and two kids.

Instead of a hollow and tragic fatal accident, we have a resounding success for F1’s push towards maximising driver safety.

And it’s important to note these improvements over the last 25 years have been implemented across the road car industry, helping to save millions of lives worldwide.