Animation giant Studio Ghibli continues on in force, despite the retirement of its creative genius Hayao Miyazaki. His legacy cannot be ignored, however, as his films remain truly remarkable and have influenced the world on a grand scale.

In 1997 his masterpiece Princess Mononoke made it over to western cinemas and for the first time his imaginative reach was appreciated.

Considered one of the best films of the 21st century, Spirited Away arrived next in 2001 and wrapped up an Oscar in 2003.

Miyazaki wrote the script and directed the film—he’s famous for his thorough involvement in his projects and the result this time is possibly the studio’s most famous film. Simply put, it’s a magnificent achievement.

Okay, so the plot is a fantastical one so bear with us on this synopsis. We have young Chihiro Ogino, whose family have moved to a new province in Japan. She’s an introverted and nervous girl who’s a bit spoilt.

After a minor detour goes awry, her parents are turned into pigs and she’s warped into the spirit world, where she’s renamed Sen and has to work at a traditional Japanese bathhouse to earn a living.

It’s a coming of age story, essentially, just warped to a staggering degree. Miyazaki’s sense of imagination is legendary and it’s on full display here, with numerous highly memorable scenes that promote his favourite themes of environmentalism and humility.

In fact, every scene is bursting with imagination, with little touches bringing the world to life.

There are delightful moments such as this (and a bit more about the trains further below).

Miyazaki’s films are crammed with strong female characters and Spirited Away is no different.

After her trepidatious start, Sen is soon working as one with the bathhouse and making friends left, right, and centre.

This is especially true of a seemingly peaceful creature wearing a mask, who has become known as No-Face.

This creature soon takes a major liking to Sen and communicates with a peculiar mixture of grunts and sighs.

It soon becomes apparent he/she/it is a bit of an unhinged nuisance. Eventually, No-Face goes on a ballistic rampage, but we’ll save the full surprise for WHEN YOU DO watch the film.

Whilst we find the ending dips a bit and becomes formulaic, making Princess Mononoke Studio Ghibli’s outright masterpiece, there’s just so much going on in the first 90 minutes it’s impossible not to state this is one of the greatest animated films ever made.

A towering achievement that any animation studio would be proud of.

Trains in Spirited Away

There are two enigmatic scenes involving trains from Spirited Away which seem to hold the same affection worldwide as we have for them.

The first occurs halfway through the film when Sen has found her feet and observes a lone train hurtling off into the distance, the tracks covered after a heavy bout of rain. 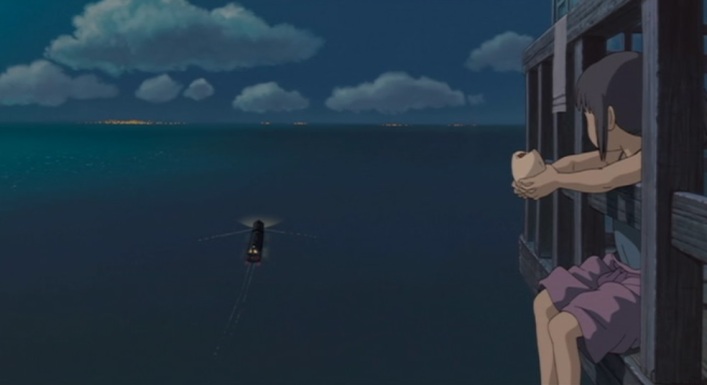 The imagery (those urban lights off in the distance – human life!), Studio Ghibli’s trademark use of minimalistic piano tinkles—it invokes a hundred thoughts on life in one instant.

This is then bettered when Sen and No-Face take a journey on a train.

Again, the introspective nature of the film emerges and it’s a moment of calm as our protagonists take in the beauty of the world around them.

The swaying hand supports remind us of a scene from early on in Final Fantasy VII (a game with a huge amount of trains, including a train graveyard), which is a neat little addition to a quite wonderfully charming and life-affirming film.