The Lost Generation by David Tremayne

Due to the sport’s horrendous safety standards at the time, as well as one piece of terrible luck, all three didn’t see out the decade.

To ensure their legacy remained intact, Tremayne set out to document their lives with this excellent biography. Three young British men are studied:

In what was a tragic and tumultuous decade for the sport, where the death of drivers was commonplace, the death of all three meant Britain suffered a lost generation of talent.

This is where Tremayne’s investigative journalism skills dig deep to turn three men no longer with us into something more than statistics in history books.

Naturally, interest in Formula One or motorsport will pique your attention in this book. But if these aren’t your type of thing, there’s still no reason why you wouldn’t enjoy this.

It’s an account of three talented young men who, sadly, got cut down in the prime of life.

For some reason, Tremayne left out Williams driving ace Piers Courage. The 28-year-old from Essex died in a horrendous fireball crash at Zandvoort in June 1970.

We couldn’t find an explanation for this, unfortunately, so we’ll take a look at the three men focussed on in this book.

Roger Williamson was 25 in July of 1973, a working-class lad from Leicestershire who’d used only his talent to get to Formula One.

In his first race at Silverstone for the March Racing Team, he was wiped out in a pile-up triggered by South African Jody Schekter.

At the next race at Zandvoort, a puncture pitched his car into a barrier, catapulting him upside down and hurtling him along the circuit.

But the real problem was the shameful lack of reaction from marshals and safety services, which was simply down to an appalling lack of organisation or foresight.

The result was Williamson died of asphyxiation, whilst images of Purley’s desperate attempt to save his friend went on to claim prestigious photography awards.

It’s one of the sport’s most shameful incidents. The BBC was even showcasing the race live on TV (which was quite rare in the early ’70s before the sport took off big time), so many families on a Sunday afternoon were left to watch the tragic images.

Tremayne here details Williamson, who for a long time was an unknown driver in only his second race – we get to see what made him tick, how he came to be in F1, and what could have transpired.

Fresh-faced and boyish, Tony Brise was taken on by former World Champion Graham Hill after a brief spell with Frank Williams Racing Cars.

Hill snapped up 23-year-old Brise for his Embassy Racing chassis, with Brise completing 10 races for the outfit. This included one points finish, suggesting the partnership would go on to greater things.

Along with Hill and several other mechanics, Brise was killed in a plane crash in late 1975.

Graham Hill was piloting after the team’s test in France, but made an error in foggy conditions.

In an instant, Britain lost one of its legends, and the upcoming driver who was expected to go on and achieve great things.

Pryce was a World Champion in waiting, the belief in the F1 paddock remained until early 1977.

Unfortunately, he’s consigned to F1 history as the driver involved in the sport’s most horrifying fatal accident.

Search for his name online and you’ll come across brutally graphic images of his car hitting marshal Jansen van Vuuren at 200mph. There’s even a notorious video of the incident millions of people have now seen.

But there was much more to the 27-year-old than that. Alongside his good looks, there was one hell of an excellent racing driver.

Unfortunately, he didn’t get any race winning machinery in his brief career.

On his final race weekend, he was actually fastest in damp conditions by many seconds, indicating the extent of his talent.

It was his sudden passing that epitomised much of F1 in the 1970s, a tragic sport of regular fatality.

Whilst this does make The Lost Generation a poignant read, it’s never depressing.

Tremayne explains to the world who Williamson, Brise, and Pryce were, which stands as a fitting legacy for three men who were snatched away from the world as their shot at greatness beckoned. 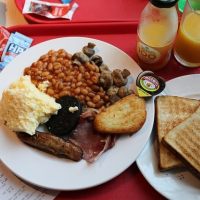