Once every other year or so, we return to the world of Frasier to get some intellectual comedic satisfaction. The Cheers spin-off aired in September 1993 and enjoyed 11 seasons up to 2004, making household names of its stars. And it’s bloody brilliant.

The show was created by Peter Casey, David Lee, and David Angell (who sadly died in the 2001 terrorist attacks in America).

That trio worked on Cheers during the 1980s – towards the end of its run in the early 1990s, Kelsey Grammer struck a deal with them to continue on with the character.

The premise is Frasier Crane’s daily life. A progressive but rather pompous psychiatrist, we join him as he returns to Seattle having split from his wife Lilith (Bebe Neuwirth).

Although he’s sophisticated and occasionally stuck up, he also has a strong sense of morality and a genuine desire to help people. Yet he’s also prone to snobbish outbursts and is clearly egotistical about his intellectual prowess.

But he’s able to balance out his foibles with a fun and relatively outgoing personality (at least for the first few seasons – from season five onward, the writers focussed more on his pomposity to create laughs).

From episode 1 (the show’s pilot sets the tone for what’s ahead – the writing and performances are exceptional) we find Frasier keen to start afresh – he’s beginning a new career as a radio presenter.

Whilst settling into that, his brother Niles (David Hyde Pierce) enters his life again – the two strike up a bond (it’s revealed later in the series they were estranged for many years), despite their often bitter sibling rivalry.

Then their equally estranged father Martin (John Mahoney) – forced into early retirement due to a gunshot injury – has to move into Frasier’s luxury Seattle flat.

What follows is essentially an odd couple setting, as Martin’s personality is so markedly different from Niles and Frasier. The brothers are intellectually refined and arrogant, Martin likes his beer and sports.

When Frasier and Martin clash, the former decides to draft in a therapy assistant. The latter decides upon the eccentric British lady Daphne Moon (Jane Leeves) and, despite her weirdness, she hits it off with the family.

The loveable Niles, married to the appalling Maris (an atrocious character clearly very controlling and odd in appearance, but we never get to see her), instantly falls in love with the brusque Mancunian.

That goes on to form much of the show’s humour, as Niles fumbles his way towards trying to deal with his failing marriage and love for Daphne.

Meanwhile, Frasier becomes good friends with the promiscuous and charming Roz (Peri Gilpin), whose radio savvy ways ensure she can be more than a match for Frasier’s educational might.

She’s a talented producer, but is also somewhat lovelorn – always going for the wrong men.

And that’s the set up for the show! Each episode revolves around one off the above, but the central focus was a development of the characters – and you do grow to love them.

We see Niles’ marriage collapse in heartbreaking fashion, whilst he also hopelessly pursues Daphne, and Frasier and his father (plus Eddie the dog) attempt to get along.

And it’s through that the writers, with impeccable intellectual wit, turned this into what is surely the best sitcom of the 1990s.

Grammer was the star of the show, with Frasier Crane becoming an unexpected hit on 1980s hit sitcom Cheers.

What was supposed to be a brief thing turned to focus as one of the main characters, which led to storylines such as his love life.

That introduced us to Lilith Sternin – she was clearly also intended as a one-off character, but was so popular she also got a more fleshed out role in Cheers.

That turned into various appearances across Frasier’s 11-year run, too. Neuwirth (60) now spends most of her time on broadway singing and dancing.

But in Frasier her character was often made out to be too pale and unnattractive (rectified in later seasons) – androgynous, essentially.  But she’s actually most striking and we always had a big crush on her, in part due to her intellect and confidence.

Frasier’s brother also wasn’t intended as a long-term character in the show. But after seeing David Hyde Pierce perform – as well as his uncanny resemblance to a young Kelsey Grammer – the producers happily went ahead with him.

And rightfully so. Niles is essential, without him there is no Frasier. And Pierce’s brilliance as a comedic actor can’t be understated – he’s sensational, showing an uncanny natural talent.

And whilst the intellectual side is refined, he also had the occasional opportunity to showcase his physical comedic chops.

Such as the below scene, where he’s waiting in Frasier’s apartment for a date and starts obsessing. Ultimately, he lets his anxiety get the better of him.

Piece is now 60 and, since Frasier, has done a mixture of theatre, TV, and film.

But he doesn’t seem interested in pursuing anything major and is largely out of the celebrity limelight post-Frasier.

Meanwhile, Grammer insisted that his father be played by John Mahoney. Contrary to popular belief, the latter wasn’t American – he was from the North West of England. Blackpool, to be exact.

The show’s nods to England continue with Daphne Moon, played by Jane Leeves. From Essex, she plays a character from Manchester.

Whilst her performance is very good, her accent is about as Mancunian as a dead rat.

The English press mocked her for that and she attempted something a bit more ambitious for later season, but it Niles’ observation of her shrill yawdling, “That’s a lovely accent is that… Manchester?” No. Not it bloody well isn’t, Niles.

Anyway, her awkward relationship with the anxiety-ridden Niles is something of a highlight in the show.

Although Mahoney, again as insightful as ever, went on to highlight Frasier’s excellence dropped the moment Niles and Daphne became an item.

Peri Gilpin as Roz, meanwhile, initially didn’t get the role. That went to one young actor called Lisa Kudrow – yes, Phoebe from Friends.

Although Kudrow shot all her scenes for the first episode, the producers didn’t think she was working out and Gilpin was given the nod. And she really is terrific – a sultry, good hearted lady who’s prone to following her lustful instincts too closely.

But Gilpin and Leeves also really hit it off in the show, and the two now live next door to each other over in America.

Frasier’s iconic opening titles are famous for the use of the Seattle skyline and the brevity.

Whilst these days Game of Thrones and House of Cards have two-minute opening credit epics, Frasier just bloody well gets on with it. The jazzy piano tinkling serving the show well.

It was typically overlaid on a final scene to wrap up a respective episode, as you can see above.

There’s a possibility the show could return. We think this is a bad idea, it peaked around 1995 and although the later seasons weren’t terrible, even John Mahoney noted the writers had run out of ideas.

There’s no point keeping it all running if it’s a cash cow that’ll spoil the show’s legacy, although Grammer (now 64) has continued to impress in various other dramatic roles.

And that’s where we think he should remain, leaving Frasier as a classic hallmark of 1990s sitcom excellence. 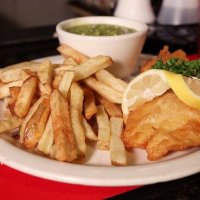