How to Avoid Huge Ships by Captain John W. Trimmer

This internet legend is a book we haven’t read. We did want to get a copy, but seeing as it costs £412 on Amazon.co.uk we did make the decision to pass on this one.

That retail site is partly responsible for making the esoteric work from 1982 a cult classic. With a title like that, how can you possibly go wrong?

Essential Seafaring Lessons in How to Avoid Huge Ships

Taking a wild guess here, but we’re presuming the non-fiction work is for salty sea captains and the like.

The ones with hair on their knuckles. Think of Quint from that Jaws classic.

Anyway, in America you can get the book about huge ships (and avoiding them) for less than $10, which seems a bit unfair on us Brits. Oh well. Naturally, this work is now more of a novelty item than anything else.

That title and the advent of the internet has ensured its place in history.

But, yes, this is a real book. And it’s about how you, a sea captain, can go about avoiding huge ships out on the open waters of the ocean.

The Barnes and Noble synopsis of the work suggests it’s “fascinating” to learn about what takes place on the bridge of a boat at night (or life down in an engine room).

We’re sure it’s an interesting read. But what’s even more interesting are the many and varied customer reviews across Amazon for this book.

Our favourite is this 2011 review from Noel D. Hill. 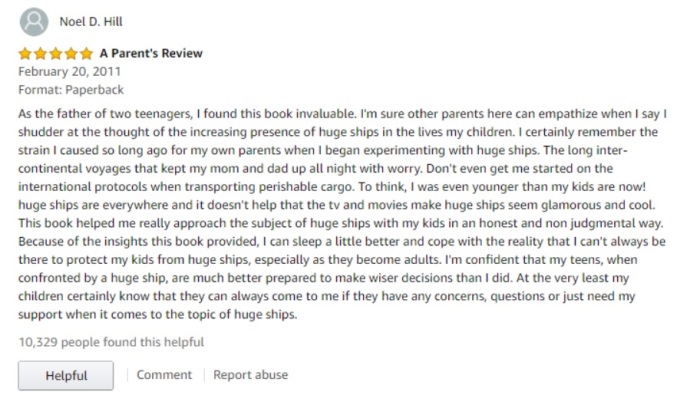 “As the father of two teenagers, I found this book invaluable. I’m sure other parents here can empathize when I say I shudder at the thought of the increasing presence of huge ships in the lives my children. I certainly remember the strain I caused so long ago for my own parents when I began experimenting with huge ships. The long inter-continental voyages that kept my mom and dad up all night with worry. Don’t even get me started on the international protocols when transporting perishable cargo. To think, I was even younger than my kids are now! huge ships are everywhere and it doesn’t help that the tv and movies make huge ships seem glamorous and cool. This book helped me really approach the subject of huge ships with my kids in an honest and non judgmental way. Because of the insights this book provided, I can sleep a little better and cope with the reality that I can’t always be there to protect my kids from huge ships, especially as they become adults. I’m confident that my teens, when confronted by a huge ship, are much better prepared to make wiser decisions than I did. At the very least my children certainly know that they can always come to me if they have any concerns, questions or just need my support when it comes to the topic of huge ships.”

But there is some negative feedback. Always with the naysayers, eh? We were so incited by this one we highlighted the main bit of the message.

As for the writer and sea bloke, Captain John W. Trimmer, we couldn’t find any information about him, unfortunately.

“Trimmer’s my name and avoiding huge ships is my game. I’ve been happily married to my smokin’ hot wife, The Sea, for many a year.”

.@AHugeShip Just gave my book to a funny little company called “Amazon”. They have something called a “Kindle” they want to put my book on.

The other one, @AHugeShip, has its profile description as:

“Don’t try to avoid me…John Trimmer’s book is a sham.”

Regardless of the reality, what we hope is Trimmer is out there right now, blasting across the ocean waves, and living up to his name by avoiding huge ships.

As that, frankly, puts some peace back into an otherwise crazy world.

On a similar, but different, note one of the biggest online in-jokes is the above innocuous t-shirt. It features three wolves howling at the Moon.

Sales of the random shirt skyrocketed after it became an internet sensation. Reviews have since poured onto Amazon to document the craze about the t-shirt.

“This item has wolves on it which makes it intrinsically sweet and worth 5 stars by itself, but once I tried it on, that’s when the magic happened. After checking to ensure that the shirt would properly cover my girth, I walked from my trailer to Wal-mart with the shirt on and was immediately approached by women. The women knew from the wolves on my shirt that I, like a wolf, am a mysterious loner who knows how to ‘howl at the moon’ from time to time (if you catch my drift!). The women that approached me wanted to know if I would be their boyfriend and/or give them money for something they called mehth. I told them no, because they didn’t have enough teeth, and frankly a man with a wolf-shirt shouldn’t settle for the first thing that comes to him.

I arrived at Wal-mart, mounted my courtesy-scooter (walking is such a drag!) sitting side saddle so that my wolves would show. While I was browsing tube socks, I could hear aroused asthmatic breathing behind me. I turned around to see a slightly sweaty dream in sweatpants and flip-flops standing there. She told me she liked the wolves on my shirt, I told her I wanted to howl at her moon. She offered me a swig from her mountain dew, and I drove my scooter, with her shuffling along side out the door and into the rest of our lives. Thank you wolf shirt.

Pros: Fits my girthy frame, has wolves on it, attracts women

Cons: Only 3 wolves (could probably use a few more on the ‘guns’), cannot see wolves when sitting with arms crossed, wolves would have been better if they glowed in the dark.”

Wolves… huge ships… the internet truly is a most glorious place. 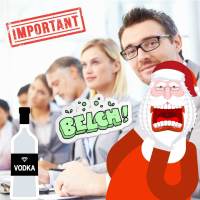 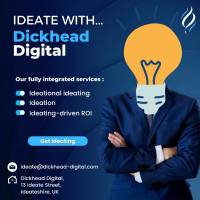 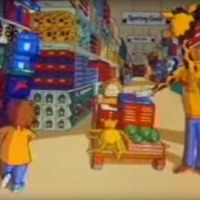 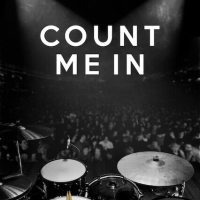 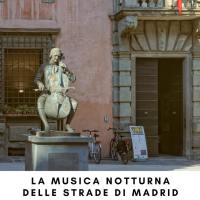