We’ve kept it well preserved (sort of) since it was published. It was the first proper magazine Mr. Wapojif bought, which was on a day off from school as he was ill due to scurvy.

Mesmerised by it all, this issue was a humdinger! Along with a world exclusive look into Donkey Kong Country 3, there was a 24 page pull-out about the Nintendo 64.

Until that moment in 1996, Mr. Wapojif had never heard of it! With games such as Super Mario 64 and Goldeneye 007 by Rare unveiled, a review of Super Mario RPG, and Dragonheart on the Game Boy after the big blockbuster film.

It blew the young lad’s stupid mind! Oh, there was also a review of the legendary Mo Hawk Headphone Jack on the SNES.

In the pre-internet era, the only way to get gaming news was to read magazines such as NMS or the brilliant Digitiser on Teletext (a major influence for Mr. Wapojif).

The latter was surreal, controversial, and didn’t pay too much attention to games, the former was good fun but generic; being the official magazine, some of its reviews seemed to be bumped up to encourage readers to buy mediocre games.

In this issue, Dave Upchurch was the editor, along with a new arrival called Dave “Jnr” who had big long hair and looked around 20.

As games magazines often did during the ’90s, in the editorial pages it made them all out to be halfwits and madmen for the sheer hell of it.

Two decades later, I’ve no idea what these guys are up to, but this is the interesting thing about journalism – a magazine such as this, which will mean nothing to them now, has a lot of meaning for Mr. Wapojif.

Upchurch was an excellent editor, though, and produced a magazine which could appeal to kids, adults, and man-boys.

There was a big emphasis on fun and no one took anything too seriously, unlike magazines such as Edge which can often be intensely serious and pretentious. NMS simply did what Nintendo’s games do – be a lot of fun, and this was thanks to Upchurch’s guidance.

The quality plunged downhill as the order came through to make the copy “trendy” – as a result, content was filled with gems such as “yer godda do this” etc. to tap into da yoof.

By then it was the N64 era – bored with NOM’s dribble, Mr. Wapojif turned to the brilliant N64 Magazine from 1998 onwards. Even a letter from NOM requesting him to extend his subscription couldn’t deter him.

The result was a defining moment in Mr. Wapojif’s gaming youth – a switch to an immeasurably more creative magazine, although the NMS days still have a fond place in his black, cold, lifeless heart.

The main review in this issue is for Super Mario RPG. Scoring 90%, and now regarded as another Nintendo masterpiece, it seems weird this game was never released outside of Japan and America.

Indeed, young us didn’t get to play the damn thing! We still haven’t – time to get it off the Wii U eShop, we guess.

We remember being tempted by the long-forgotten T-HQ game Mohawk & Headphone Jack, an innovative attempt to try something new in 2D platformers, but ultimately received 75%. NMS labelled it as “too frustrating”, which is still putting us off nearly 21 years later.

For this piece of reminiscence, we finally looked the game up on YouTube and it annoyed us within 60 seconds due to the soundtrack.

The game can also be completed in 50 minutes, highlighting how short some games still were two decades ago – for £40 that’s a bit of a rip-off!

Back in ’96, there were still remnants of the NES era habit of ramping up the difficulty to make games last longer, but T-HQ was being a lazy here.

There’s also Dragonheart on the Game Boy! If anyone remembers this 1995 movie, it was a big deal at the time as CGI special effects were still relatively new. Sean Connery voiced the Scottish dragon in the film and it starred Dennis Quaid, too.

The Game Boy adaptation apparently went pretty well, although NMS had a habit of being clearly biased and eager to ramp up reviews to get stupid kids to pay for stuff.

The big fuss at the time, though, was about the end of the SNES era. With the CD-based PlayStation in the shops and a big hit, Nintendo looked to counter Sony’s progress in the market with an advanced new console.

This would be the N64 (called the Ultra 64 at first), a 64-bit console which could produce games of an unmatchable graphical calibre. It was the dawn of a new era! 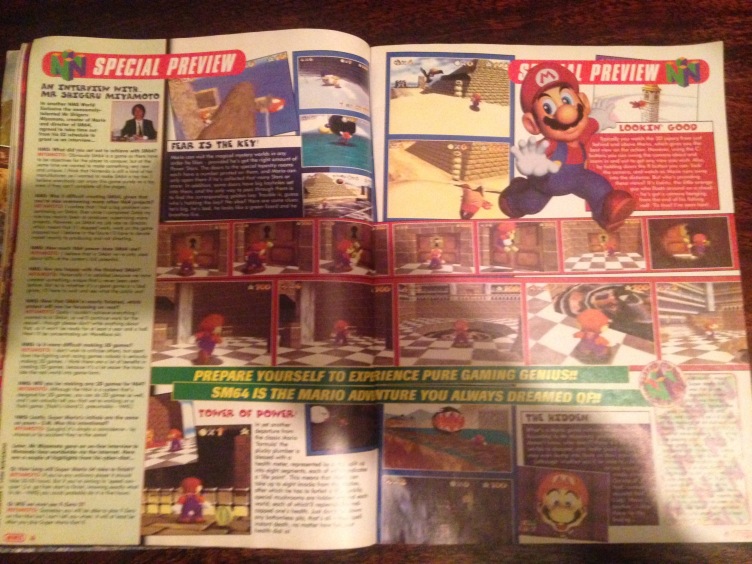 For Mr. Wapojif’s 11 year old brain, the arrival of the N64 was momentous – a defining moment in his gaming life. Nothing could dampen the colossal magnitude of the N64 pull-out feature in NMS!

Super Mario 64 was at the centre of it all as it looked goddamn amazing. At the time, it was a landmark title and clearly indicated where the future of the industry was headed – the game was simply on a different level, offering the chance of exceptional freedom and immersion.

Alongside this detailed preview, there were insights from E3 into the likes of Mario Kart R (renamed Mario Kart 64 later, of course), the stunning Wave Race 64, Blast Corps, Turok: Dinosaur Hunter, and the quite astonishing looking Goldeneye. The latter caused a sensation in late 1997, which would elevate the N64 to legendary status.

Looking back now, the sense of anticipation was palpable. NMS’ journalists were clearly thrilled about the upcoming releases, with the excitement from E3 buzzing from issue #46’s pages.

20 years ago, the industry progressed in leaps and bounds. Nowadays, despite many gamers bickering like idiots about which console has the best graphics, steps forward are largely marginal and you have to be a complete philistine to fixate over the specs of how a game runs, as opposed to what it’s like to play.

Even the arrival of the first virtual reality headsets isn’t that big of a deal, especially as they’re currently massively overpriced and something of an anti-climax, period.

Whilst 1996 marked the beginning of an often awkward step from 2D gaming into a bold new 3D world, 2017 is an era of hyper-realistic graphics, open-worlds, violence, online play, often dauntingly stupid and belligerent fellow “gamers”, and plenty of corporate gimmicks (voice chat, for instance – whoever thought that was a good idea?!).

It’s a different industry, but, as with back in ’96, it has its good and bad points.

Ultimately, issue #46 of NMS details gaming at a simpler time – with the N64, for which we have a 20th anniversary UK release special coming up, you just grabbed a games cartridge, stuffed it in the machine, and you were off.

It was a brilliant and, thankfully, can be celebrated amongst the active retro gaming community.