Today we’re remembering a legendary British magazine that really stood out during the Nintendo 64 era of gaming.

The successor to the equally popular Super Play publication (that covered the SNES), the suitably named N64 Magazine ran from 1997, changed name to NGC in 2000, with its final issue running in June 2006.

Famous for its sense of humour, scathing reviews of bad games, and impressively talented mix of journalists, it was a total delight to read in the pre-internet era.

The History of N64 Magazine

In 1998, the young Mr. Wapojif made the important decision to shift from the insipid Nintendo Official Magazine (NMS) to a far superior publication. It was a big moment for the 14 year old lad.

NMS was, at one point, brilliant when the chirpy Dave Upchurch was editor.

But after he left in 1997 it became bland and corporate—its desperate attempts to be cool rankled Mr. Wapojif and he cancelled the subscription (that his parents were paying for).

At the time, he was keen to become a journalist—the staff on N64 Magazine were more than enough to convince him why.

Alongside his daily reading of the bizarre and surreal Digitiser, that period from 1998-2001 provided some serious gaming journalistic bliss.

As a publication, everything about N64 Magazine stood out.

From artist Wil Overton’s spectacular, manga-styled front cover designs to the written content—each issue was so clearly a massive labour of love.

It really showed they were putting their backs into it. Right from the first issue! 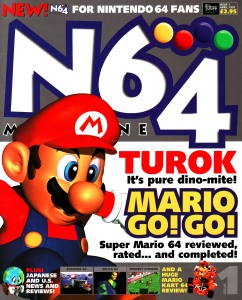 Jonathan Davies was the first editor, launching the quirky mag in April (Future Publishing being behind the printing process). That was one month after the N64 became available in England.

After that, the team became notorious for missing its monthly release date. Often by up to a fortnight as everyone scrabbled to get everything together.

For readers back then, the only way to find out what was going on was to head into a newsagent and see if the thing was on the shelves.

But as you can see from issue one, it didn’t look anything special at that time. Just another generic games mag. But it quickly found its feet.

We particularly remember a vast amount of N64-based magazines launching at the time. There were over half a dozen to choose from—we tried more or less all of them out. Jostling for position, the sheer quality and talent of the N64 Magazine staff was obvious.

Most of them even still had SNES adverts in them, such as the one on the right from issue one. Yes, Star Wars has invaded your privacy for far too long now.

What some of the key staff members achieved since is impressive, with artist Wil Overton poached by Rare and editor Tim Weaver now a thriller novelist (more on that lot further below).

Once Davies left, John Squire lookalike James Ashton took over from issue 13 (in mid-1998) – and that’s when the magazine really became a big hit.

Right, so Ashton was instrumental in bringing about more fun into the magazine. It was already a good laugh, but he set about landing quirky features and other oddities.

Arguably, this made N64 Magazine the closest to Digitiser in tone, as they were happy to focus on their surreal side from time to time.

But it was also famous for its journalistic integrity, excellent reviews, and industry-leading previews. Particularly legendary are its feedback on terrible games, such as the notorious Superman on the N64.

The magazine’s coverage of the upcoming The Legend of Zelda: Ocarina of Time is also notable. Nintendo’s classic was heavily delayed, with the magazine’s staff regularly lampooning that for laughs.

The Japanese company still has a policy of only releasing a title if it’s perfect, which can frustrate gamers impatient to play the latest releases. Patience!

Meanwhile, in 1998 and into 1999, Paul Green arrived on the editorial time around this point and he landed some good fun pieces you could find right at the back of the publication.

That combination of humour, Wil Overton’s amazing artwork, and the sense of enthusiasm from the staff made it a big hit with Nintendo fans. At its peak, the publication was shifting almost 100,000 units a month.

Eventually, Ashton left on issue 27 and the apparently foul-mouthed Tim Weaver took over from 28-41. The excellence continued with his run, with the editor continuing on the formula. Don’t fix it if it isn’t broken, right?

And leafing through an issue, you really do get an understanding of just how much effort the team was putting into each issue. Bless them!

The Transformation Into NGC Magazine

Andrea Ball, Mark Green, and Jes Bickham all had runs as editor between issues 42-59. This marked a big phase in game, as the Nintendo 64 ran out of life.

With the arrival of the GameCube, a new era was beginning. And so N64 Magazine morphed into NGC Magazine.

This hailed the return of Tim Weaver for another spell as editor (clearly drawn mercilessly back into that editing web). He had a 12 issue run from 60 to 72.

But all good things must come to an end. So it’s rather fitting that longstanding staff member Martin Kitts (often portrayed as a psychopath) got the job as editor for the final three issues.

It enjoyed a brief resurgence as NGamer, which then became Nintendo Gamer. But its last issue was in 2013. We didn’t read that iteration, so can’t comment.

Since then, the advent of the internet has changed all that. But we still love magazines—the tangible aspect is special. A decade or so back, we saw an interview with Wil Overton where he confirmed the same feelings.

But we’re in the internet era, whether we like it or not. And that means even fools like us can create this here site and rant about the golden years of gaming.

During its 120 issue run (and particularly during the N64 Magazine years), its reputation grew for honest reviews.

Particularly for bad games. The staff didn’t hold back and would pummel anything that thoroughly deserved it. Such as with Cruis’N USA in 1997.

Jonathan Davies’ editorial decision over 20 years ago put down the foundations for success. You have to remember, when the Nintendo 64 arrived in the UK a lot of new magazines sprung up.

Most of them were generic and boring, not offering any real individuality. N64 Magazine just absolutely stood out.

If you went into WHSmiths in 1997 and had a look around for the best magazine for your beloved console, what do you go for?

The one with the amazing Wil Overton front cover. Picking it off the shelf and leafing through the pages, back then the attention to detail was clear. And a quick scan of a review and it was obvious the journalistic integrity was there.

Which is why the magazine’s negative reviews became such a hit with fans. Scathing and to the point (as well as funny), if the developer was lazy or cashing in then they didn’t get away with it.

And us readers loved the magazine’s staff for such honesty.

Max Everingham and Made in Japan

Of particular note was a tiny monthly contribution from a British journalist living in Tokyo.

Made in Japan chronicled Max Everingham’s adventures out in the east. In keeping with the magazine’s tone of voice, it was light-hearted and humorous. Often, it covered some weird going on in Japan where the cuteness/kawaii culture is so rife.

It ran for several years and Everingham later put in an amusing section teaching readers useless Japanese phrases. Which was fun.

Unfortunately, the feature stopped without notice circa 2001 and we’ve never heard of Max Everingham again.

If you’re still out in Japan, Max, let us know if you’re okay! Cheers.

Gaming magazines in the 1990s and early 2000s often relied on the personalities on the editorial team to liven up a publication.

It added an extra character to each magazine, whether you picked up system-wide mags such as CVG, Digitiser, and Games Master (which got a TV show supporting it on Channel 4), or the console-specific examples such as N64 Magazine.

From the latter, Wil Overton is the most famous and respected. He’s a British artist who was hired by legendary developer Rare in 2000, taking him away from magazines.

Were still sorting out the pics but just couldn’t resist putting these fantastic tiny versions of (in our esteemed opinion) Nintendo’s finest console – the Super Famicom (that’s the Japanese version of the Super Nintendo/SNES). https://t.co/mELNxSatIy* pic.twitter.com/9DZhDoxTsF

Tim Weaver has since gone on to become an author, with his crime fiction novels something of a hit.

It took his debut novel (Chasing the Dead) a decade to reach publication. Just a warning of how tough it is for emerging talent in the industry. As well as the importance of perseverance.

James Ashton moved to PC Gamer from 2002, winning an Editor of the Year award. Then he went to the official Xbox Magazine and did a stunning job there, leading three publications into the online era.

He’s since had a complete career shift, studying at Cambridge University before going on to teach chemistry. Guess he got fed up of all those video games, eh?

Other popular members of staff included Jes Bickham, who wrote the epic review covering Ocarina of Time at the end of 1998. He hailed it as the best game ever.

This being the internet, fans of the magazine have created various online resources to delve into.

There’s a big tribute on Gaming Hell, although the site is clearly from a long time ago—the formative years for people looking to run websites. As with N64 Magazine, it’s now something of a fabulous relic of that era.

But primarily we find Out-of-Print Archive and Archive.org to be the best options.

On YouTube, as with Glenn Plant (who we chatted to on YouTube during a live feed—he lives near us in Chorley!), is covering each issue one-by-one.

Great to see the love lives on nice and strong for this magazine.

You see, everyone? Put in love, care, and attention for folks to continue on their adoration for decades to come.