Yes. Some black comedy and satire this week and, my word, is it needed. We can’t speak for the rest of the world, but England is a giant cesspit of political catastrophe and astonishing social decay right now. So Icelandic artist Hugleikur Dagsson’s depraved cartoons from 2007 will help to distract us away from all that (for a bit).

There are few words in this book. But there are many pictures. The latter are crudely drawn, which kind of adds to its macabre charm. There’s a lot of focus on subverting daily norms. Black humour is all over the place. And, well, you can have a jolly old gander at it all below.

NB: This review was supposed to go out on Saturday. But due to another bout of man flu, we’ve dropped behind schedule and have shifted this thing here for today. Got a problem with that? Hey, embrace the innovation. It’s all you’re going to get. Back to normal, next week.

Should You Be Laughing At This?

The work is somewhat reminiscent of what fuels a director like David Lynch. Dagsson sets up familiar scenes, but hints at a disgusting and perverted underworld not far away.

There are a lot of cartoons featuring disruptive families, with social decay remaining the focus. One of our favourites is below. 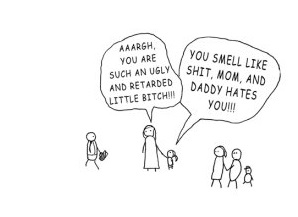 You see, it’s funny because the setting implies they’re out in public and ignoring polite social conduct. Yes?

So, immediately, everything depends on whether you find the above snippets amusing, weirdly intriguing, or utterly disgusting. We’re sure the cartoonist has had all three reactions.

When we bought this back in 2007, we found it all rather magnificent. This black humour! Just for us! And the thing turns into an amusing exercise of leafing through the work to discover some other distorted example what should be real life.

Find the one your like the most, rip it out of the book, and stick it on… we don’t know… your fridge.

So that’s fantastic. But if there’s any criticism it’s the book is somewhat repetitive. As it relies on shock humour and the grotesque, after 100 pages even the most ardent black humour fan may tire of it. But otherwise it’s totally worth a dip in and out of.

Whether you read the book depends on how much of a misanthropic bender you’re on at the time of reading. If you want to hate everything, then this is here for you right now.

If you want to bask in the gloriousness of the universe and sip at the perfection of tradition… then Watership Down is probably more for you (*snigger* Don’t tell anyone!).

But at the start of Should You Be Laughing At This?, there’s a small ode to that chilly Icelandic nation most of us have never visited.

Well, it’s there. It’s a beautiful place, too. But it’s also one far removed from many areas in the rest of the world.