Okay, so we reviewed the Michael Chrichton sci-fi action romp Congo. Now we’re taking a look at pretty much the only quoatable line from the film (other than when Amy the gorilla burps).

Captain Wanta (Delroy Lindo) has a go at Herkermer Homolka (Tim Curry) for eating sesame cake (rather than a curry, which would have been ironic). But… what if the Captain had got his lines wrong?

Here’s the original in all its glory. It appears Captain Wanta is a fan of sesame cake. Except when Mr. Homolka goes anywhere near it. How rude!

No, no, no, Captain Wanta, this has nothing to do with Big Bird, Elmo, or any of those fluffy freaks. You’re confused, man. Delirious! Must be the relentless heat of the congo (or too much sesame cake driving him insane). 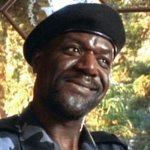 What’s with the specifics, Captain Wanta? If it was a Battenberg cake would you put in the effort to reel off that whole thing? No. No, you wouldn’t. You’d just go, “Stop eating my cake!” And you might add the suffix, “You halfwit!” Or something.

But for Captain Wanta, clearly the beauty of cake is in the little details. That’s why he’s a Captain, you see.

In that Congo heat, mate, you’re not going to be able to stop the think from baking on its plate. If you’ve got a fridge bung it in there, Captain.

Well… it just would have been a completely different type of film if this scene had been filmed, eh? Luckily, Tim Curry has standards.

Stop cheating on my sesame cake!

Hang on. This sets a bad precedent, Captain Wanta. So you’re saying if you eat different types of cake, you cheat on your favourite kind? Well, that’s just ridiculous you silly man.

Interesting way of putting it. But then eating is a way of deleting food, when you think about it. You also print it out about 12 hours later.

That… is a very good idea, you better listen to him Tim Curry.

Erm… what? He must have heatstroke, he’s talking gibberish.

You mean you didn’t intend for it to be a cake? Who sets out cooking and unintentionally bakes a cake? That’s a very odd thing to do, Captain Wanta.

Captain Wanta… you really should go and have a lie down. You’re losing it, man.

This makes sense. Captain Wanta is angry as he wishes to open a sesame cake baking business (or side-hustle). Yet can’t due to excessive taxes. We feel your pain, Captain. No wonder he hates Tim Curry.

That’s a good idea as that brake is for emergencies, Tim Curry. If you’ve eaten in then you’ve surely doomed everyone?

Not that you need a brake in the jungle, we guess, but it’s a good idea to have an emergency brake around at all times. In case of emergencies. 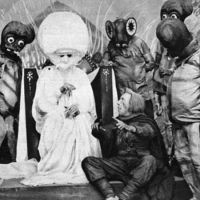 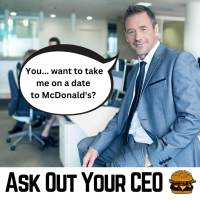