The Life and Times of Mr. Moose

The moose. In general they are pretty ace creatures. Here at Professional Moron we tend to think of them as giant monsters who are ready and willing to slaughter humanity just to get at a field full of lush green grass. Whilst we may be a bit off the mark there (they like stuff on trees, too) we are right about one thing; moose are ace. Look at this chap on the right; the stoic pose, the noble expression, the massive antlers. Why if you were to invite Mr. Moose to a dinner party he would make a great guest. Imagine all the tales he could regale your other guests with! Stories of romps through fields, manic braying, trying not to get run over when crossing a road, and hanging out in the hood (also known as the forest).

So we have a look today at some of the stuff these cool creatures get up to. There’s lots of walking, stalking, and other stuff. We should admit that England doesn’t really have any of these creatures, but we don’t have dinosaurs either and this doesn’t stop us from liking those giant extinct lizards, does it? Tsk.

The moose has really mastered the ability to indifferently stare at everything; behold this skill in the picture above. This seeming boredom with their surroundings is in stark contrast to some of the misanthropic antics they can get up to, as highlighted below. However, the moose actually enjoys blankly staring at stuff. And why? As it doesn’t have TV, that’s why. Observing nature at work is its equivalent of YouTube.

The moose often like to arbitrarily hurtle out in front of oncoming motor vehicles. This habit, whilst appearing somewhat suicidal to the human world, is actually just the moose having the good old fashioned game of Chicken. As mentioned earlier, they don’t have much in the way of entertainment, so this is a nice, harmless way to keep the young ‘uns (and drunk adults) occupied.

Here the Moose diss their human neighbours by copying what we do. It’s a childish trait of theirs; here one bathes in a stream in the manner which we have a bath or a shower. The bastard. Why if we could get our hands on its xenophobic hide we’d sit the moose down and run him through a seventeen hour community service program of wiping chewing gum gunk off the streets of Manchester. Rather!

Here a moose attempts to earn itself an ASBO by hanging around off the beaten path. Shortly after this picture was taken it began to drink bottles of cider, don a hoodie, and shout random abuse at people for no reason. Afterwards the moose headed off to McDonalds, had a smoke, and then tried to start a riot via Facebook. Tsk. Such disrespectful beasts!

Sadly some moose beasts take their ASBO credentials a step further by stealing, or vandalising, other people’s property. They often work during the stealth of night as, being hugely unemployable, they can operate at antisocial hours without hindrance. The moose is a complex beast, clearly out of step with human existence. Maybe, one day, in the not too distant future the Moose and the Human can live side by side by harmony. 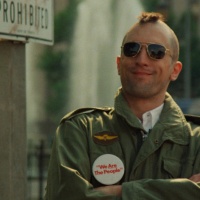