Arnold S. Big Arnie. Arnold. The Austrian Oak. The Terminator. Schwarzenegger. The man with the muscles is most famous for his movie career, political work, and for lifting heavy stuff whilst gurning like crazy. He started acting in 1969, but it wasn’t until 1984 when he really made the big time.

You know what we’re on about: The Terminator. The machine who will stop at nothing to wipe out Sarah Connor, then protect John Connor, all whilst saying stuff in a monosyllabic way. Even offering The Terminator free ice cream wouldn’t end its cold-blooded pursuit of violence.

One thing’s more than bloody obvious in Schwarzenegger’s films: he frequents the gym. This is due to his bodybuilding career, during which he lifted REALLY massive stuff such as fridges, Labradors, and lots of shelves.

Sadly, when erecting the shelves with a hammer, Mr. Schwarzenegger’s mighty man strength usually led to a calamitous collapse of the building’s infrastructure. He would pick up a hammer and wallop until the building imploded around him!

Naturally, Big Arnie didn’t pursue a career in construction. He went into acting, and here we pay tribute to the many brilliant faces he’s pulled over the years. 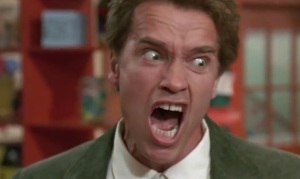 Undercover cop John Kimble loses his crap whilst teaching school beasts! The kids aren’t alright – they’re unruly! How to get them to quieten down? Roar: “SHHHHUTT UPPP!!!”. It’s funny as he’s mental! That’s Kindergarten Cop for you. 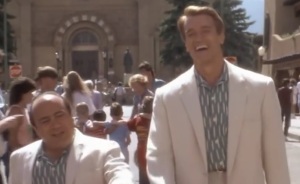 People often forget Schwarzenegger did broaden his often violent movie horizons with goofball comedies. Here Arnold’s one massive SOB and DeVito is tiny – it’s hilarious once you get it. Arnold’s clearly on Planet Happy in Twins.

What would it be like seeing a former Mr. Universe bodybuilding champion in drag whilst pregnant? Thanks to Junior we got to find out!

In one complex plot, Schwarzenegger decides on a new life only to have some weird meltdown on the New Life O’Meter. Cue roars of agony and remarkable facial expressions. Hell yeah, 1990 in movies! Total Recall all the way!

Later in the film Arnold has to yank a tracking device out through his face (via the nose passage thing). Glovely. Arnold noises galore! 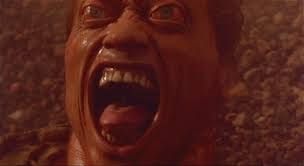 To round out this Total Recall recall, we find Big Arnie catapulted out onto the surface of Mars. Where’s the oxygen? There isn’t any, leading to some truly awesome special effects. Who needs CGI?!

Schwarzenegger’s first film was no classic, but has a weird kind of “so bad it’s good” appeal. He spends a lot of the film wandering around in a toga, but here he’s outside a plane waving at old women. Weird? Yes.

Jingle All The Way

Schwarzenegger will stop at nothing to get his son the Christmas present he deserves. This makes Jingle All The Way much like The Terminator, minus the swearing and fountains of explicit violence.

An alien beast lands in a jungle for a laugh and all hell breaks loose. Big Arnie and his army dudes, visiting the region for a romantic picnic, promptly take on E.T. This takes some exertion, which makes Arnold’s face go funny. Predator. Yeah. 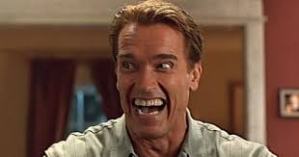 Dullard Harry is a dull businessman with a dull life. That’s True Lies right there. Until, inevitably, it turns out he’s one wacky secret agent! This leads to great face flexing in a surprisingly excellent movie! 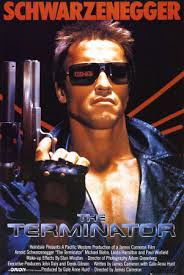 Finally we have the man himself strutting about grunting, “I’ll be back…” from the iconic 1984 flick. Seriously, though, if you saw a bloke like that wandering down a street in normal, day-to-day life you’d think, “That man is on drugs.” For shame!