Tasked with the brutal expectation of writing 250 words inspired by the above picture, Professional Moron set out to prove its critics wrong and display a story with high artistic values: integrity, grit, intelligence, and sandwiches. Plus Charlton Heston.

This challenge is courtesy of Matthew Wright over on his blog. Check it out, yo, if you also wish to participate, plus for other things such as writing, science, reason, and sandwiches. For now, here’s our short story:

Charlton Heston had seen how it had all been blown up by the idiots. Those gosh darned unclean apes had made it blatantly clear the foolhardy nature of humanity. Human beings seemed so eager to pursue a post-apocalypse society, and it was inevitable it would come to this. Luckily, film star Heston was still around to lead the honour for humanity. He alone could restore something to this forsaken planet!

After the events of Planet of the Apes (in the non-reality after the credits have finished – even up to the bit where the logos right at the end have gone) he returned to the beach and dug a massive hole in the ground, burying the remains of the Statue of Liberty in some feeble attempt at retaining some semblance of humanness. Yet he had failed, for the Planet of the Apes sequels weren’t as good as the first one, and the 2001 remake was just… shockingly bad. “Who’s bright idea was that?!?” Charlton roared in prescient rage.

Heston returned to the film set where the ape actors in their pretty decent (for the 1960s) costume designs consoled him for his loss. Dropping to his knees once more, he arched his back and roared into the heavens, “Is there a McDonald’s around here?! I want a Big Mac!” Cornelius the ape bit his lip in concern, and part of his ape mask parted to reveal his human jaw beneath. Winking at Heston, he muttered, “Don’t worry, they’ll clear that up in the edit.”

Heston, realising the bitter irony of not being able to iron out human kind’s grievous errors, smirked knowingly. Despite being half naked, he drew forth his double barrelled shotgun (he was a spokesman for America’s National Rifle Association, of course) and began firing wildly into the air, laughing demonically as he did so. “BWAHAHAHAHAHA!” he went, before adding, “MWAHAHAAHaaa….”.

Heston never did return to a McDonald’s. He lived out his days as a forlorn movie star, stuck in the paradoxical world of wondering what his reality was – a movie set, a dream, or both? Or a drive through McDonald’s, which he eventually presumed to be the case once the apes discovered microwaves.

Want to read our other amazing short stories? TOUGH! We haven’t got any yet, although Mr. Wapojif is working on one about food. Watch this space: 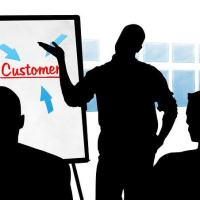