Exclusive Santa Column: The Many Explosive Dangers of Christmas

Christmas comes but once a year – the problem is it’s every year. As the world’s population continues to explode, Santa has turned from a family friendly, peace loving yuletide legend into something of a belligerent, stressed out git. Anyway, we’re contractually obliged to run his ongoing exclusive column, so busy yourself with his recent tales of woe.

Jesus f***ing Christ! As if things weren’t stressful enough, last week we had a visit from the local health and safety authority. Apparently, they wanted to ensure the radioactive afterglow following the nuclear fallout at my factory last year was under control.

They turned up in their goddamn suits with their goddamn stern expressions and goddamn briefcases and gave me a pretty rough time of it. You see, this is the horse**** I have to go through every year because of you tossers.

The first problem arrived due to John. As we passed through my heavily fortified factory gates with sniper rifle elf lookouts and snarling Rottweiler guard dogs, I lead half a dozen stiffs into my kitchen area to deck them out with cheap coffee in plastic cups. The plan with this was I presumed it might quell their tedious droning. Quite the opposite!

One of the suits pulled up a seat to sit down, but a sudden hissing noise and rattling erupted causing considerable consternation amongst them. “Jesus Christ!” the terrified suit exclaimed, “What the hell is that?!” with genuine dismay latched on his voice. “That is John, our factory pet” I calmly replied. “But that’s a rattlesnake!” he yelled as John reared up and lunged at him with general fervency.

The big **** up here is the suit was bitten by the outraged John, who is normally pretty docile (so long as you steer well clear of him at all times). The suit collapsed in a heap and John slithered off behind a nearby fizzy drinks vending machine, but I had to call an ambulance to come out and save the man.

Unfortunately, the ambulance got stuck in all the snow, so a helicopter was flown out. By the time it arrived the bloke was stone dead. To make matters worse, an unexpected snowstorm meant the helicopter crashed into the ground near our factory, killing all onboard. I soon realised all this was going to leave a negative impact on the factory’s overall health and safety rating. I cursed up a storm over that, I can tell you.

This weekend, after the funeral and grieving process had passed, the suits returned. This was under the strict order John had to be handed over to a zoo, which I assured them I’d done (we’d actually lost all sight of John since the incident and were living in a state of constant terror should he re-emerge).

Regardless, I got to it and started showing the suits around our factory. It’s at this point I realised the place is a bit dilapidated, with mold festering in many rooms, potentially lethal factory machinery rusty and malfunctioning, and my team of maverick reindeer wandering about openly consuming Class A narcotics.

There was much head shaking and tutting from the suits, especially when they saw an elf cleaved in half by an errant Barbie doll making machine. Indeed, the bit which glues Barbie’s head to her body began juddering violently and Stuart, an elf who has been in my service for 100 years, was decapitated in front of everyone.

I hoisted up my walkie talkie and barked orders at my shell-shocked staff. Roger, one of the more hardened of my employees who is famed for his 1,000 yard stare of PTSD, turned up with a sweep and cleared the corpse away from the toys. Problem solved.

We broke off for lunch on Saturday to discuss the factory and Santa’s plans for Christmas, although the health and safety officers were clearly emotionally drained and scarred by their time at the factory.

I demanded  a batch of mince pies and sherry be brought through to cheer them up. Once they’d downed a fair bit of sherry they became much more jovial, with one of them telling me “I bloody love you, you’re my best mate you are”. I then offered them all a free Barbie doll toy to take home with them.

Unfortunately, this ended in a brawl as the leading health and safety officer, Brian, got to choose the best doll. The others became raucous about this, with Stephen unexpectedly punching Brian in the face. Things immediately erupted into a violent fight, with briefcases flying everywhere and several toupees falling onto the ground.

Brian and Stephen eventually clattered into a sweet vending machine, inadvertently stirring John from a slumber. The outraged rattlesnake immediately went on a berserk rampage, with only four of the health and safety officers surviving. Apparently, this incident is going to lead to some sort of prosecution. Shit.

Tune in next time for more fun and games with cuddly Santa! 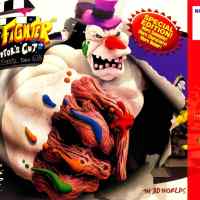