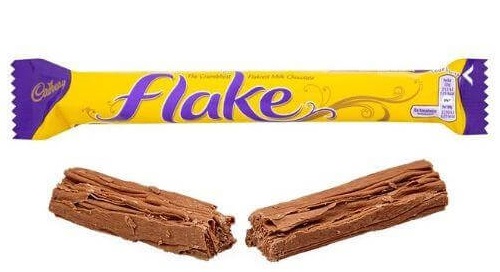 Flaky.This delicate chocolate bar is as light as a feather. Not unlike pink wafer biscuits, but with a flaky, chocolate quality that’s most excellent.

Alongside passing a basic taste test, it’s also famous for a series of exaggerated adverts from the 1990s making it out to be, like, resplendent and luxurious.

We guess it is, really, but it’s affordable the masses. So no matter how inferior you are in social status, you can buy flakes with wild abandon.

It’s a chocolate by made by Cadbury’s that features thinly folded milk chocolate. As you eat it, the thing tends to crumble (“flake”) apart due to its staggering delicacy.

Flakes are very popular in the UK to this day and you’ll find them in most shops and supermarkets.

The packaging has a distinctive yellow wrapper with purple text, which has become pretty iconic for the brand.

It’s delicacy and lightweight feel gets it bracketed in with the likes of Maltesers—the lighter way to enjoy chocolate.

But Flakes are presented as a long, thing, rectangular chocolate bar with notable dips and troughs. Like its a mountain on Mars, or some such.

However, to this day Cadbury’s guards the process of making the Flake chocolate bar as it’s a lucrative income source for the business.

But that hasn’t stopped copycat brands from having a go at the flaky market.

The History of Flake Chocolate Bars

Flake chocolate bars have been around since 1920. Yes, that’s 102 years of flaky experience!

The recipe was discovered by chance at Cadbury’s Bournville factory in Birmingham. An employee noted thing streams of chocolate formed flaky ripples of deliciousness. Thusly, a legend was born!

Since then, the chocolate bar has headed out across the world and you can also find them in Ireland, Australia, and South Africa.

Cadbury’s used this tagline to sell the chocolate bars:

“The crumbliest, flakiest milk chocolate in the world.”

As kids watching the array of adverts about this chocolate bar, you basked in the brainwashing of Flakes being pure opulence and luxury.

The adverts all had “Flake Girls” jammed in.

Then there’s one of the most famous British adverts, which any of us around in 1992 will have (unfortunately) burned into our memories.

We say “unfortunately” as these adverts are all so annoying. That song… sheesh. It makes our skin crawl. The incredibly annoying (but catchy) musical jingle was composed by Ronnie Bond.

But the message of total luxury was ramped up to the maximum in this one involving a bathtub and excessive amounts of water.

Seriously, that woman’s water bill must have been enormous.

The actress in the advert is model Rachel Brown, who was 31 at the time. She later went on to appear on the cover of Vogue, but then fell into obscurity.

There were 30 Flake Girls over the advert campaign’s 36 year run.

This one in 1968 featured Hoima Macdonald splashing, with much merriment, through water on a horse.

In 1999 she told The Scottish Daily Record:

“I was about 21 or 22 at the time and I got paid six pounds an hour plus expenses. I was so naïve. I had to spend hours practising unwrapping the Flake bar very slowly and then putting it into my mouth. I couldn’t understand why the crew were falling about laughing. I eventually worked out what they found so amusing and I haven’t been able to eat a Flake since.”

So, yeah, a lot of these adverts were bizarrely sexualised and promoted the idea of extreme relaxation, adventure, and the splendours of the world.

However, it was briefly revived in 2008 so that singer Joss Stone could sell out and do a Flake Girl type advert. Yay?

But this is all why we hate advertising so much, just the complete and ridiculous exaggeration and the falsities involved.

In reality, most people eating Flakes will be working-middle class types sitting down at 7pm to watch Coronation Street.

No waterfalls. No bubble baths. No inane grinning. Just stuffing their face whilst watching Corrie. Now that truly is opulence.

This is due to the alignment of fat crystals of the cocoa butter of the Flake. Of course it is! Watch the video for the full explanation.

Such a distinctive quality makes the Flake one of the most indestructible chocolate bars in all of the known universe.

Good information to have, should you have acquired a Flake and be desiring to melt it down as soon as possible.

Don’t do it. That would be an exercise in futility.