There’s a time and a place for horrific tinned all-day breakfasts, and that time and a place is right here and right now on Professional Moron. Behold this monstrosity in all its glory. Look at it! We stumbled across this one and gleefully purchased it, simply as it’s a fabulous monument to bad health and gluttony.

Indeed, it has hash browns, “sausages”, and beans all in one. The convenience! There’s other stuff in there as well, such as all manner of body and brain destroying preservatives, salt, sugar, and probably the remnants of nuclear fallout from Chernobyl. Why the heck not? It’s got everything else in there already, so let’s delve deep and take a look at this most pure of evils.

So what’s in it? Here’s our summary of the contents of this SOB. We’ve got to say, by comparison the Heinz Baked Beanz with Pork Sausages we review the other day is several leagues ahead of Hunger Break’s effort in terms of food quality. This is like comparing white bread with brown bread – it’s so obvious the latter’s superior (full offense meant, white bread aficionados – weirdos). Anyway, here’s the full list of contents:

Baked Beans: Ubiquitous and slimy, baked beans are enough to make any hungry half-wit not hungry no more.

BBQ Pork Steaklet: It’s difficult to ascertain which one is from the picture above. We’re guessing it’s one of the larger circular blogs.

BBQ Pork Sausages: At least the thing appears to be shaped like a wee sausage and, we’re positive, it will be filled with about as much genuine meat as a rock.

BBQ Beefburgers: Again, this will be one of the larger blobs. Will it taste any different to the pork steaklet? We’re guessing… no.

And finally… through the keyhole!

It’s the big reveal. This is what’s inside the tin! Hunger breaks? I’m sure it’ll break many things if you eat this thing, probably starting with your intestines before slowly demolishing your capacity for rational thought.

Rest assured, we have recycled the tin and the paper wrapping on this thing. The food was given to an belligerent, drunken tramp. He responded by yelling some garbled nonsense at our esteemed editor, Mr. Wapojif, and throwing it back in our direction. So… we got our food back. Hurray! 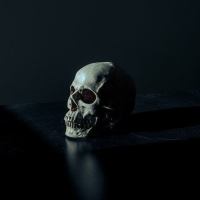 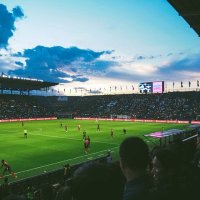