Santa Claus is back (see the road to Christmas 2022) and you’d better behave yourselves! If you do, then Santa will bring you nice presents like satsumas and sacks of charcoal. We’re gonna need them in this joyous cost of living crisis!

Anyway, let’s get on with it. We have to pay Santa for these columns by the word and this preamble counts towards his take.

Last week I hired a burger because I thought it’d be a great employee. To cut a long story short, the burger is now dead after I killed the burger after I ate it.

I was drunk and kind of forgot I was supposed to not eat it.

Problem is it’d really gone mouldy and off after my bitch wife cooked the thing up days earlier. I got food poisoning like you would not believe. The runs so bad I was bellowing all day and night.

Delirious, I was visited by Aqrabuamelu the Scorpion Man and his mate Camazotz the Death Bat. I welcomed my dear friend back with a big man hug, but Camazotz I gave a more cautious handshake and a pat on the wing.

You never can tell if those fuckers have rabies or not.

Anyway, I put on a giant nappy and we sat in my office quarters having a most splendid conversation (through all my vomiting, sweating, and delirious ranting).

Aqrabuamelu is a most charming storyteller about his days driving spears through the skulls of his nefarious enemies. He works as a business informant for me as a side hustle, tipping me off about my enemies and other communists.

Camazotz is more of a difficult character. She’s a librarian death bat.

I don’t see the point in that and I told her directly. That caused a lot of tension. When you have the powers of being as she does (a death bat, no less) and she’s offering her assistance in a library to nerds! What’s the point?!

My head elf, Markus, was called in to fetch drinks (absinthe and gin) and he found me berating Camazotz about the stupidity of her existence.

Markus took me to one side and explained she’s a libertarian.

I was so embarrassed about the situation I fouled my nappy vociferously and it began overflowing and seeping from the sides (of the nappy). Markus began hosing me down as I apologised for the confusion.

Camazotz just sat there with a look of disgust on her squinty bat face. I have decided I do not like Camazotz the death bat. Not one bit.

“Welcome Back to Reality, Dearie”

My insane wench of a wife keeps saying to me, “Welcome back to reality, dearie!” What?! She says she can “always tell” when I’m in one of my “blackouts”.

I snarled, “What the fuck are you talking about, you insane bitch!?”

She said about my drinking. The “blackouts”. I stared at her, giving her the evils. She said I went on a drinking spree yesterday and I “keep going on about” my great friend Aqrabuamelu.

And how I’d put rat poison all over the factory floors to “kill off” that “raging son of a bitch” death bat Camazotz.

I didn’t recall any of that. I got Markus into my quarters and he complimented me on my weight loss overnight. That was down to the relentless diarrhoea.

“Where the hell is Aqrabuamelu?!” I demanded.

Markus shuffled awkwardly on the spot.

“Sir… I have not seen this ‘Aqrabuamelu’ since you were in a meeting with him yesterday.”

“AND THE BAT?! The librarian!”

“Libertarian, sir. Yes, she is also, apparently, no longer on the premises.”

When someone triggers my rages I have protective memory loss to block out the sadistic rampages. Camazotz is my kryptonite (that and socialists). The drinking merely adds to that, of course, but it numbs my pain due to my burden of importance. But I was confused! So:

From the look on Markus’ face I could tell he thought I was losing it. I bellowed out, “CHRIST! WHY IS EVERYTHING SO CONFUSING WHEN I’M HUNGOVER!?”

Markus did his trademark backing out of the room act like a goddamn snowflake and so I barked at him to stay put. Slugging straight from my nearest whiskey bottle, I pointed a huge, grubby, swollen index finger at Markus. “YOU!”

What followed is one of my most diabolical schemes yet.

So fearful of Camazotz was I that I figured booby traps were the best port of call to get the situation under control. You name it, I wanted it fitting across the factory!

Markus and I took the morning off to watch Indiana Jones and the Temple of Doom. It gave me some solid ideas for booby traps. Including:

Heartily thumping Markus on the back, dislocating his shoulder blades in the process, I congratulated myself on an excellent brainstorming session.

As Markus collapsed on the floor in agony, I left him to get on with the booby trap plan. Meanwhile, I had Christmas to force upon the world!

Firing up the Factory

All the above have been distractions from my job. I’ve got to get Christmas 2022 on the road! Not deal with bookish bats and gaslighting elves.

As I stalked, stark bollock naked, down to factory unit one the wife appeared offering me freshly baked cookies.

I ignored her, barging her out of the way so she comically fell over in a heap.

Rudolph then appeared. He was out of it on drugs again. Ignoring the reindeer, I barged him out of the way. He fell over onto his antlers in comical fashion.

Nurse Doreen then came out of her clinic. She was holding a spleen in one hand and some intestines in the other. Ignoring her, I barged her out of the way. She slipped on the intestines and fell over in comical fashion.

By the time I got to factory unit one I had:

Of course, I was also stark bollock naked upon arrival. I burst into the unit and the elves turned around dramatically to stare in total horror.

Laughing demonically I bellowed, “GET BACK TO WORK!”

I then charged at the nearest group of elves next to one of the Barbie doll machines. With a squeak of terror, the elves ran away.

My enormous beer belly then grumbled. The spleen Nurse Doreen had been carrying had become stuck in my beard, so I grabbed that and munched down on it. Then I slugged from the whiskey bottle I stash in there.

Sitting down to observe the elves working, I continued slugging from the whiskey bottle. It was but not yet midday. This is the commitment ones needs as a business owner.

This is was it takes to be successful.

Grinning smugly in sheer superiority, I belched exuberantly and wet myself. 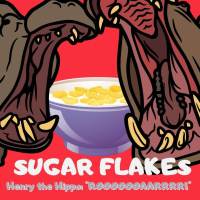